Mario contributed to our project by making available his paintings characterizing all the publications on our site.
We want to thank him and the least we can do is to advertise his Facebook page and his Instagram profile.

Thank you Mario on behalf of all of us!

Mario Barbierato MAITÉ, born in lower Padua, in a small country village; he has a simple story and an inexplicable, (in his opinion) predisposition to painting.

Since a young boy, he manifested this “need” not always understood by people around him. His being self-taught, however, was a continuous stimulus for research and a continuous desire to understand.

He does not have an academic background, but at a certain point in his life he met a painter from Padua, Dolores Grigolon, and he entered her studio, being enchanted by her and precisely during those days, he understood how fundamental painting could be for him. He drew energy from it, through painting he could represent his happiness, his pain, what he saw, but above all, his feelings and his mood.

There was an intense period where research never abandoned him, research in the looks, in the shapes of the body, in the palette and its colours.

Another important moment in its life was when he started to work as a restorer. In that period he had the opportunity to see, to touch, to observe , but also, as he often says, to “smell” paintings by Tintoretto, Titian, Tiepolo … paintings that represented sometimes twisted figures that tormented him.

And then there were the words and writings, the constant torment of an education never received, a hunger and an unbridgeable desire, until, perhaps by chance (but by chance nothing ever happens) he began painting on the pages of books, of newspapers, experiencing inexplicable pleasure.

That confusion of words in the newspapers, the fact that newspapers were read by other people, leafed by other hands, seen by other eyes other then his own eyes, didn’t torment him any longer, on the contrary they gave him energy and they were an added value.

Sometimes it is through an entire page of a newspaper, or many pages of a book or a musical score, or all together torn, superimposed, mixed like a set of different knowledge, merged only by the colours , by an incredible strength together with his weakness that Mario Barbierato MAITÉ is able to show what inside him, as a present for all people around him and for all of us. 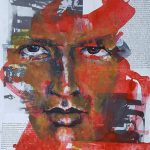